Although the Church holds a lot of history, so too does the organ which is housed in the Church. The first organ was purchased in 1895 for £29 and was later sold for £13 in 1915 when another organ, a Canadian model which had been won in a raffle by the Burdan brothers, was donated to the Church. Over the years, this latter organ did great service but, when inspected in late 2006, was found to be beyond a repairable state.

This presented the Society with a dilemma. The financial costs of repairing the organ would have been prohibitive, but the association with the Burdan family, ever present in the history of the Church, was one we did not wish to dismiss lightly. 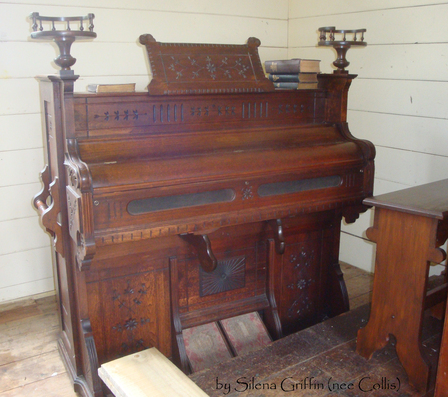 Then, in February of 2007, we were approached by a descendant of the Burdan family, to see if we would like their family organ. This latter organ is a Mason & Hamlin pump model, built in California in 1903, and was originally owned by a great grandson of Richard Prouse, Claude Burdan, and his wife Madge, having been purchased from importers AF Pinny of Wellington.

We feel very fortunate to have been offered this organ, which of course we accepted, as it means we can still retain that link with the Burdan/Prouse family within the Church. 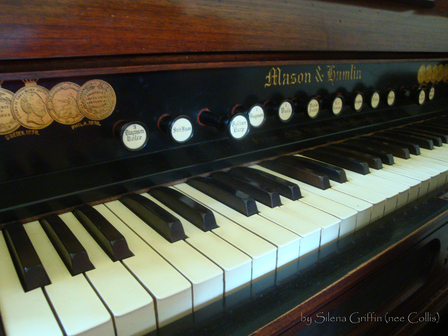 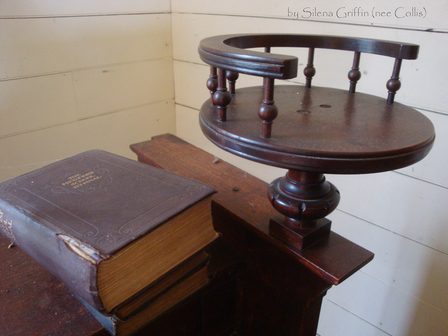 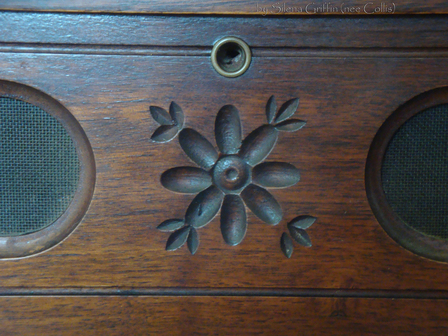 Decoration above the keyboard 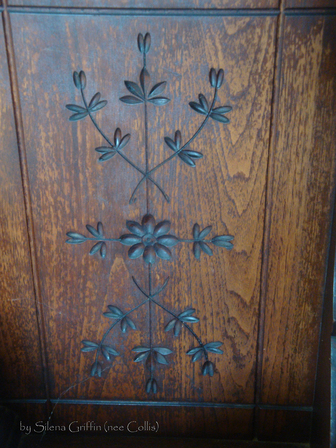 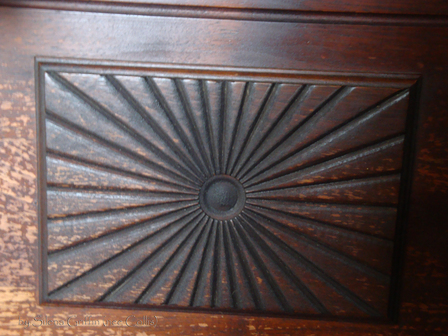 An article on the internet by:  The Cyclopedia of New Zealand [Wellington Provincial District] Music Dealers, Importers, Etc  has the following about Mr F.J. Pinny, Wellington.

Mr. Pinny established his business in 1886, and having been all his life connected with musical societies and musical friends, he made rapid headway. In the beginning his imports were small as compared to his present transactions, but he has for many years been a constant importer from England, America and Germany. His principal lines are pianos, reed organs and harmoniums; but he deals very largely in the smaller instruments, and occasionally he supplies pipe organs. The Musical Instrument Depôt, is centrally situated in a fine two-storey brick building. The Modern Times, referring to musical matters in the Empire City, said:—” There was a time when it might justly be said that music was at a low ebb in Wellington. Only the best houses were supplied with pianos, and many of these were generally silent. Now that is all changed, and to no one is more of the credit due than to Mr. F. J. Pinny.” Mr. Pinny has placed his instruments with families who dare only dream of pianos before he started, and now-a-days a house without a piano or organ is looked upon as poor indeed. Many a music teacher, too, has struggled into a comfortable living from the start given by Mr. Pinny, ‘who brightens the homes of rich and poor with pianos on terms never heard of before’ Mr. Pinny is a most approachable man, and those who by their actions show an honest intention will ever meet with the greatest consideration. It is very rarely indeed that a piano is returned to him; for, stimulated by his kindly treatment of them, his customers strain every point to make the instrument their own as rapidly as possible. Many thousands of pounds' worth of pianos, organs, and other instruments have been disposed of by Mr. Pinny on the time-payment system. Mr. Pinny was born at Motueka, Nelson, where his father, the late Mr. Samuel Pinny, landed in the early fifties from the ship “Constantine”. Before coming to Wellington, Mr. Pinny was a volunteer in the Permanent Artillery force, and won several trophies as a marksman. He is a member of the Manchester Unity of Odd-fellows, but his life hobby has been music. He takes an interest in all organisations for the improvement of the people, and has for many years been an enthusiastic member of the Baptist Church. One of Mr. Pinny's principal objects has been the acquiring of the best quality instruments, and, being an expert in joinery and general workmanship he has had special instruments built to his own orders, and amongst his stock can be found the best of the instruments made by Lipp and Sons, Broadwood and Sons, Kirkman, Chapple and Co., and other leading piano makers. The choice stock of organs is by Mason and Hamlin, and the celebrated Worcester Organ Company.